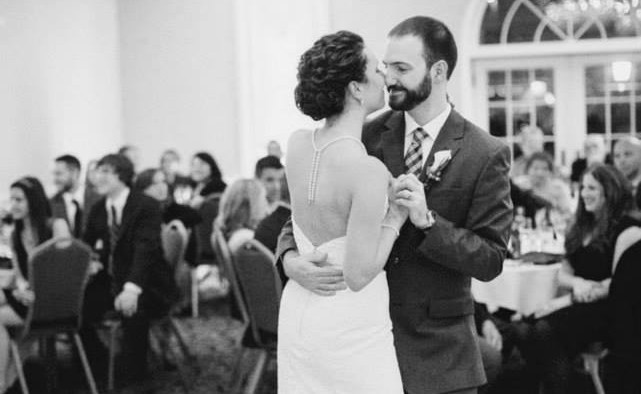 My epilepsy story is a long and complicated one, with frustrating twists and turns. The journey to my diagnosis was not easy or crystal clear, and I had to fight and advocate for myself and my own health.

It begins in the late summer of 2011. I had just arrived to our vacation destination with my best friends and then boyfriend (now husband), Brian. We were staying at a cottage on Lake Ontario for a long weekend. I was coming off a crazy week – working long hours, at grad school every night until 10 pm. The night before leaving for vacation I was on campus until 9:30 taking a final, drove home to Syracuse afterwards and went to bed late.

Upon arriving to our destination the next morning, I had barely eaten anything. My nutrition for the day had consisted of a donut and a hot dog, a gigantic iced coffee and a couple of beers. Delicious, right?

Some time in the early afternoon we decided to go swimming. The beach there was rocky – no sand. Everyone was having trouble navigating out in to the water, slipping and sliding. It was no different for me. As I started to wade in to the water, I slipped on a rock and could not regain my footing. Suddenly, I had no control over my left leg. It just kept jumping in the water. Within a matter of seconds I lost control over my body and my last thought before going under the water was “oh no.”

A lot happened while I was out (and part of me is thankful I wasn’t conscious for it). Thankfully my best friend, Maggie, was right next to me in the water and scooped me out immediately after I went under. They brought me to shore, called 911 and waited for me to come to on the beach. The first thing I remember is Brian walking me up to the cottage. I was so confused, foggy. It felt like a dream. He laid me down on a bed inside and for the 4th time I asked him what happened and he said “we think you had a seizure.” Then, I was back to myself. I immediately sat up and said “what?!”

The EMTs arrived and I demanded (very kindly, I’m sure), that they take me to the hospital in Rochester, NY, where I worked. I knew people there, I trusted the ER and I was ready for answers.

Well, we didn’t get any. They ran every test under the sun, including a CT scan, and everything came back normal. One should be happy when this happens, and part of me was. They told me it was convulsive syncope brought on by stress and dehydration. Well that certainly made sense after the week I had.

As we drove back to the cottage that night though, I couldn’t help but notice a nagging sensation that something else was going on. But I pushed it down and away. One of the worst memories I had from that day was Maggie standing by my hospital bed with tears in her eyes saying “Please don’t ever do that to me again.” And I never wanted to. I never wanted to see That Look on someone’s face again.

Fast forward more than three years later. It’s October 2014; Brian and I are less than a month away from getting married. Life is good! Stressful again, but good. At this point I had moved back to Syracuse, gotten a different job. We bought a house, a dog. I was close to finishing my MBA. It was a Friday, late in the day, and I was yet again coming off a stressful week at work (are you seeing a pattern, here?) I was staring at my computer screen, reading something, and the familiar sensation came over me…heart racing, eyes crossing, a quick panic then…darkness.

Next thing I know I’m on the floor of my office staring up at co-workers. They all have That Look. I hear the familiar sounds of EMT chatter and a gurney being rolled over, someone tells me they called Brian, I think I crack a joke, and I’m on my way to the hospital.

Visit number two, more than three years after my first “episode,” again resulted in no diagnosis. Another fainting episode they said. Drink more water, try yoga, take some deep breaths and it will all be ok. Insert eye roll here. The nagging feeling was growing bigger this time. Surely this couldn’t be a coincidence. But we were getting married in a month. This wasn’t part of the plan!

We made it through our wedding and honeymoon in the Dominican Republic scot-free. It was wonderful. Those memories will stay with me forever.

In January 2015, just a couple months after getting married, I had a third episode. This time it was in my sleep. I woke up around 5:30 in the morning, the light was turned on and Brian was hovering over me in bed. There is That Look again. I must have just come to and had been asking what happened. Again the familiar words of “I think you had a seizure” came out of his mouth. My heart sank. My mouth was bloody from biting my tongue and I had chipped my front tooth. But, it was in the comfort of my own home? Little victories.

We called my doctor and drove to the hospital. No special concierge service for me this time since we arrived via our own means.

Once I was admitted and we told my story to every nurse, resident and doctor, my angel ER doctor looked at me and said “Oh honey, of course that was a seizure.” It was almost as if she should have added a “duh!” in there. They immediately started me on an IV of Keppra, referred me to a neurologist and I was on my way.

Finally. FINALLY! A diagnosis! At age 30. This I could work with. I have never felt more relief than that day, laying in triage in the ER.

To say it’s been easy since then would be a flat out lie. I’ve been through medication and dosage changes, which come with their own laundry list of side effects, including extreme anxiety. Those people who told me I needed to drink more water and take deep breaths and try out yoga? Well, they were right too. Self-care is important for everyone, especially if you’re living with a medical condition that is exacerbated by stress. I have had to learn how to truly rely on friends, family and loved ones for help. For most of 2015 I haven’t been able to drive, which has been so much harder than I ever thought it would be.

But I’m ok. I finished my MBA program and graduated in May. And the best news of all…I’m pregnant with our first child, due May 2016. Yes, women with epilepsy can get pregnant and have happy, healthy babies, too. Who knew?

Unless you know or love someone living with epilepsy, you probably don’t know a lot about it. I didn’t. There is so much stigma that surrounds the disease. I’ve witnessed it first-hand now from others. “You don’t look like you have epilepsy” or “But you didn’t have it as a kid?” or, after just dipping my toe back in to the world of driving again, I had a co worker say to me, “You’re driving again, that’s great! But isn’t that dangerous?” Part of me wanted to hit her…just a little.

But these are windows of opportunity. To educate. To advocate. To make people aware. Yes, I am 1 in 26 living with epilepsy. And I’m ok. And if you’re 1 in 26, you will be ok too.