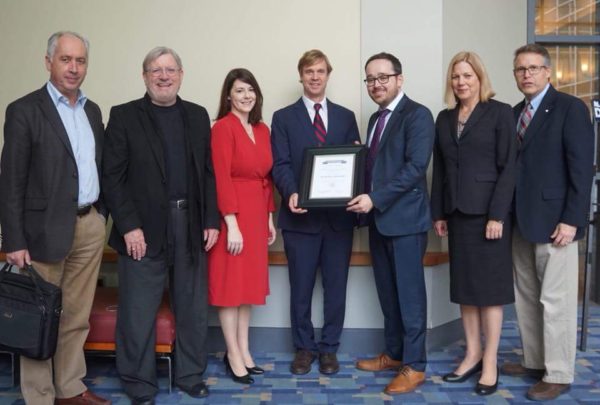 About the Kimford J. Meador Research In Women with Epilepsy Award

The Kimford J. Meador Research in Women with Epilepsy Award is awarded to support early career clinician-scientists who have contributed significantly to the understanding and better care for women with epilepsy.

Dr. Meador is a Behavioral Neurologist and Epileptologist. His research is primarily focused on the behavioral and cognitive effects of epilepsy and its treatments.

For over 15 years, his research group has studied the neurodevelopment effects of antiepileptic drugs, which has led to changes in FDA warnings. Now this group is also studying other pregnancy outcomes in women with epilepsy and their children.

Currently, Dr. Meador is a Professor of Neurology and Neurosciences at Stanford University, and Clinical Director, at Stanford Comprehensive Epilepsy Center. Dr. Meador graduated from the Georgia Institute of Technology in Applied Biology (with high honor) and received his MD from the Medical College of Georgia.  After an internship at the University of Virginia and serving as an officer in the Public Health Corps, he completed a residency in Neurology at the Medical College of Georgia and a fellowship in Behavioral Neurology at the University of Florida. Dr. Meador joined the faculty at the Medical College of Georgia (1984-2002) where he became the Charbonnier Professor of Neurology. He was the Chair of Neurology at Georgetown University (2002-2004), the Melvin Greer Professor of Neurology and Neuroscience at the University of Florida (2004-2008) where he served as Director of Epilepsy Program and Director of the Clinical Alzheimer Research Program, and Professor of Neurology and Pediatrics at Emory University (2008-2013) where he served as Director of Epilepsy and Director of Clinical Neuroscience Research.  He joined the faculty of Stanford University in 2013. Dr. Meador has authored over 400 peer-reviewed publications. His research interests include cognitive mechanisms (e.g., memory and attention); cerebral lateralization; pharmacology and physiology of cognition; mechanisms of perception, consciousness, and memory; EEG; epilepsy; epilepsy and pregnancy; preoperative evaluation for epilepsy surgery; intracarotid amobarbital procedure (i.e., Wada test); functional imaging; therapeutic drug trials; neurodevelopmental effects of antiepileptic drugs; psychoimmunology; behavioral disorders (e.g., aphasia, neglect, dementia); and neuropsychiatric disorders.

“For me personally, my most interesting behavioral experiment has been watching our children grow up and find their paths in life. An experiment full of discoveries, unexpected turns, and rewards. My dear collaborator in this endeavor is my wife Maggie.” ~Kimford J. Meador

“For me personally, my most interesting behavioral experiment has been watching our children grow up and find their paths in life. An experiment full of discoveries, unexpected turns, and rewards. My dear collaborator in this endeavor is my wife Maggie.” ~

Current and Past Recipients

Meet the current and past recipients of the Kimford J. Meador Research in Women with Epilepsy Award 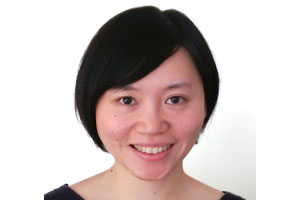 Dr. Yi Li is an Assistant Professor of Neurology at Stanford University. Originally from China, she completed her MD/PhD training under Dr. Bo Xiao at Central South University in China and under Dr. Carolyn Houser at UCLA. Her PhD research was in epileptogenesis and neurogenesis in animal models of epilepsy. She then joined the neurology residency program at the University of Massachusetts Medical School, followed by an epilepsy fellowship at Stanford University. Since her fellowship, she has had the honor of working under the mentorship of Dr. Kimford Meador and Dr. Michael Snyder, who are experts in behavioral neurology and genetics.

Dr Li’s interests include women with epilepsy, precision medicine, genetics in epilepsy, and improving quality of patient care. Her current endeavor is to find genetic biomarkers that may help identify neurodevelopmental risks in children born to women with epilepsy. She is part of an expert team that focuses on women’s health in the neurology department at Stanford. Dr. Li is also currently developing a genetic epilepsy clinical program at Stanford, and her long-term goal is to help build a model that integrates both clinical and genetic information to improve the care and treatment of women with epilepsy. 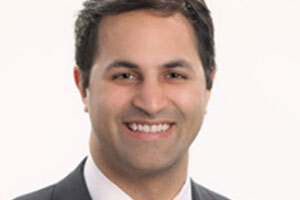 Dr. Naveed Chaudhry is an Assistant Professor of Neurology at the University of Colorado School of Medicine. He is also the Director of the Adult Epilepsy Diet Center and the Associate Medical Director of their Highlands Ranch Epilepsy Monitoring Unit (EMU).

During his epilepsy fellowship, he became interested in the management of women with epilepsy. Through his clinical experiences, he discovered epileptologists had a unique and special relationship with women with epilepsy by helping them throughout their pregnancy. Under the mentorship of Drs. Emily Johnson and Gregory Bergey he began to develop a stronger interest in this field and started on clinical research projects. His current research is looking at life stressors in women with epilepsy compared to women without epilepsy. Additionally, he has co-authored a book chapter on preconception counseling that is forthcoming.

His additional research interests include global health, dietary therapies for epilepsy, and quality improvement in the EMU. 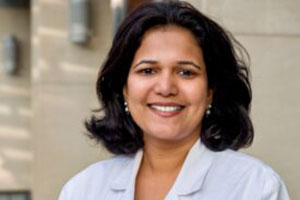 Dr. Mathias is actively involved in clinical research in the topics pertaining to her clinical interests while also involving trainees in quality improvement projects. She has co-authored a book chapter on “seizures” in a maternal-fetal medicine textbook, and another book chapter is underway. She is currently one of the collaborators on a Practice Improvement Project (PIP) for pre-pregnancy counseling/ folic acid use for the American Epilepsy Society (AES) practice management committee. 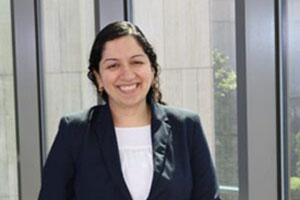 Dr. Deepti Zutshi is an Assistant Professor of Neurology at Wayne State University School of Medicine. After completing medical school in the 6-year BS/MD program at the University of Miami Miller School of Medicine in Florida, she continued her residency and fellowship training at Emory University in Atlanta. It was under the guidance of mentors such as Kimford Meador, Suzette LaRoche and Sandy Helmers that developed a strong interest in women’s health, pregnancy and epilepsy and critical care electroencephalography.

After Dr. Zutshi joined Wayne State, she immediately perceived that women with epilepsy were not receiving dedicated epilepsy care, counseling and family planning. Furthermore, Detroit was nationally recognized as having one of the nation’s highest infant mortality rates with the possibility that women with epilepsy were even further affected by this statistic. This led to launching the High Risk Epilepsy and Pregnancy clinic at the Detroit Medical Center which has thrived over the last six years. Collaborating with high risk pregnancy and materno-fetal medicine specialists, Dr. Zutshi has established a clinical practice, patient outreach and education and clinical research in working with women with epilepsy living in an urban environment.

Looking to the future, Dr. Zutshi hopes to use her knowledge and experience in helping women with epilepsy achieve healthy and successful pregnancies through education and outreach.  As she was once mentored, she also enjoys educating other physicians and budding neurologists on how to take care of women with epilepsy. 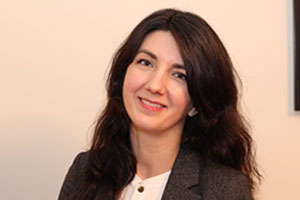 Dr. P. Emanuela Voinescu is a Junior Faculty/ Investigator at Brigham and Women’s Hospital/ Harvard Medical School. Originally from Romania, she started on the research path when, during medical school, she won summer undergraduate fellowships at the California Institute of Technology and worked under the mentorship of Dr. Mary B. Kennedy.  After a solid training in the molecular underpinning of synaptic specificity and plasticity, as a Ph.D. student in the lab of Dr. Joshua R. Sanes at Harvard University, she pursued clinical training in Neurology and subspecialized in Epilepsy, a fascinating disease where the neuronal connections are dysfunctional.

She is currently focusing her clinical and research efforts to improve the care of women with epilepsy of childbearing age, working closely with Dr. Page B. Pennell. Her research so far has focused on optimizing the selection of the antiepileptic regimen in the preconception settings and fine-tuning it to adequately compensate for the specific drug clearance changes during pregnancy.

Her most recent work revealed that women with frontal lobe epilepsy have the highest risk for seizures worsening during pregnancy, even with adequate therapeutic dose monitoring. For most pregnant women, seizure worsening starts predominantly in the second trimester. She plans to look further into the physiological underpinnings of this finding.  Dr. Voinescu’s long-term goals are to work toward deciphering how the complex interplay between sex hormones and genes influences the pathophysiology of epilepsy, the response to treatment, and drug metabolism. 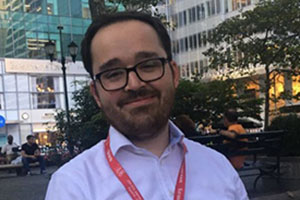 Dr. Kinney initially obtained a Bachelor’s degree in Pharmacology and Therapeutics, and went on to obtain his medical degree with distinction from the Queen’s University, Belfast in July 2008, and obtained membership of the Royal College of Physicians (UK) in 2012, completing the Neurology Specialty certificate exam in 2015. He is a member of the American Epilepsy Society, Irish Institute of Clinical Neurosciences, and the Association of British Neurologists.

Kinney has been interested in epilepsy since the early days of his training in neurology, including the issues around epilepsy and pregnancy. He owes a debt of gratitude to the strong mentorship that he received in this regard from the main investigators of the UK and Ireland Epilepsy and Pregnancy register; Drs John Craig, Jim Morrow, Stephen Hunt, and Ms. Beth Irwin.

Currently, Dr. Kinney is undertaking a sabbatical in New York City at the Langone Medical Centre, Comprehensive Epilepsy Centre, NYU to develop his understanding of electroencephalography and the surgical management of epilepsy. He has published work related to status epilepticus, epilepsy, and pregnancy, and currently, his goal is to continue to carry out research in epilepsy upon his return to Ireland.