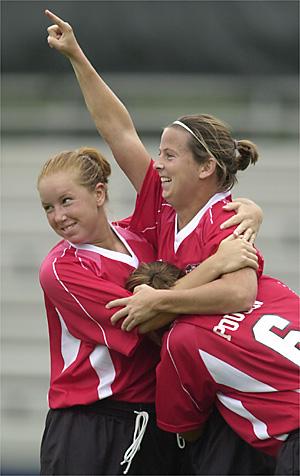 Hello, My name is Sara Gustafson and I am 31 years old. I was diagnosed with partial-complex epilepsy on September 15, 2009, at age 29. At times I think of it as the day my world stopped turning but MOST often I think of it as a new challenge or rock that I just need to push out of the way. I grew up just outside of Baltimore with my mom and 4 brothers and sisters. I was the headstrong, hyper child who could not be contained, so my mom begged the local church and rec councils to allow me to participate in softball during the summer before I turned 5, and soccer in the fall, as soon as the softball was underway. She just couldnt handle all 5 kids at once!!! Let me tell you all, after that first day of soccer, I fell in love and that was it. I marched upstairs, rooted through my closet and found my softball glove and hat, and immediately handed them to my mom. I said to her “I don’t want to play this ever again, I love soccer” and so my story began. From that day on, I played soccer every single day, it became my passion; my go to when things were not so great, and when they were amazing too. When I was about 14 I was playing in a soccer tournament in Raleigh, NC in December when I jumped for a ball and collided with another player. I don’t remember what happened after that but my mom tells me that I was hit from behind and proceeded to hit my head on the ground and was knocked out. I clearly have no recollection of the event what-so-ever. I do vaguely remember wandering around the hotel 3 days later and being very confused though!!!. Fast forward another year and a half and it happenend again! A teenage brain, with two major concussions (brain injuries), not to mention all of the times I actually headed the ball or got hit in the head by elbows or other peoples heads in between the two injuries. After the two big head injuries I was in the clear for the rest of my high school playing days until college. I had the amazing opportunity to live out every kids dream and go to the University of Maryland on an athletic scholarship for soccer. While I was there I was hit in the head numerous times (at least 5) but none were anywhere near as severe as the previous two. When you play at that level, and you head a ball the wrong way, you can literally feel your brain swell inside of your skull, but you don’t want to come off of the field. It is one of the worst pains you can imagine. Knowing what I know now, I would have stepped off in a second! The thought processess that go through an athlete’s mind when they are on the field are much different then anyone who is not in that position. You don’t want to give up your spot. You want to keep fighting and you want to keep playing because it’s the one thing you love more than anything else; and because it’s the one thing you have worked so hard for, for so long. Pain is temporary, pride is forever….right? That is what really goes through our heads during the time. I know it may sound absolutely absurd to the outside world, but to elite athletes, its what we work for all the time. We play because we love the game so much. We can’t just walk away. No matter what. I had no clue that the injuries to my head would lead to the epilepsy. After college, I actually played semi-professional for the Northern Virginia Majestics, and was hit just one more time, my last time. 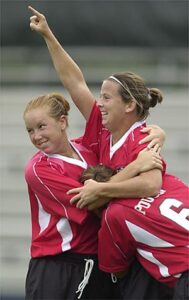 The funny thing is, when I sustained my final concussion, I had already begun having absence seizures but I didn’t know what they were yet and had not been diagnosed. I called them my ff’s or funny feelings. I was originally diagnosed with vasovagal syncope (a heart condition) but the cardiologist could never get me to faint. For some reason both my mother and I knew that this wasn’t the right diagnosis. Then, in May of 2009, on a Sunday afternoon, I was taking a nap on the couch, and somehow woke up on the floor. This may not have seemed to out of the ordinary except that I had wet myself, and was unusually tired when I came to, to the point that I got up and laid back on the couch for about 7 more hours. Then I called my mom to tell her. (She is a Traumatic Brain Injury Nurse). Her reaction was….”that sounds like a seizure” and I just brushed it off!!! I couldn’t have had a seizure. Not me! Fast forward to August and our family vacation on Topsail Island, NC. We had been drinking the night before, and I had gotten up to run the next morning in the heat. My day then consisted of a little sand soccer, followed by fun in the sun all day long. By the end of the evening I felt awful. I remember being dizzy and confused and having never felt like that before. So instead of hanging with the family, I went back to our place and slept. I woke up face first in a huge puddle of blood, with a broken nose and two bottom teeth dangling by the roots out of my mouth. I shoved the teeth back in (which is apparantly what you are supposed to by, I have learned) and proceeded to lay right back down and go to sleep because I was so tired and out of it. My older sister, who is a nurse as well, was two rooms down but I didn’t wake her up. I just went back to sleep. Needless to say when she got up and saw the blood she was a little scared.

So began my story with Epilepsy. I came home from Topsail and found a neurologist who immediately ran massive amounts of tests. His first question after the tests came back was, “did you play contact sports?” Currently I am on my third medication because the first two really affected my moods. Lamictal made me feel crazy and even suicidal (I was in the less than 1%) and Keppra made me very angry and caused me to not sleep. So topomax it is, and it has been working. I have been seizure or “FF” free for over a year now, and my doctor says I can play soccer “recreationally” again…as long as I don’t get hit in the head and I make sure the people around me know of my condition so they dont hit me either. It has worked out well for me, because it was really hurting me to not be able to do it.

I would like to try to increase the efforts in research for post traumatic concussive syndrome and post traumatic epilepsy, specifically in soldiers and in athletes. It’s happening more often than we think!!! I hope my story hasn’t bored you all and I hope to hear more of yours too!! GO TERPS! XOXO SARA
[/framed_box]