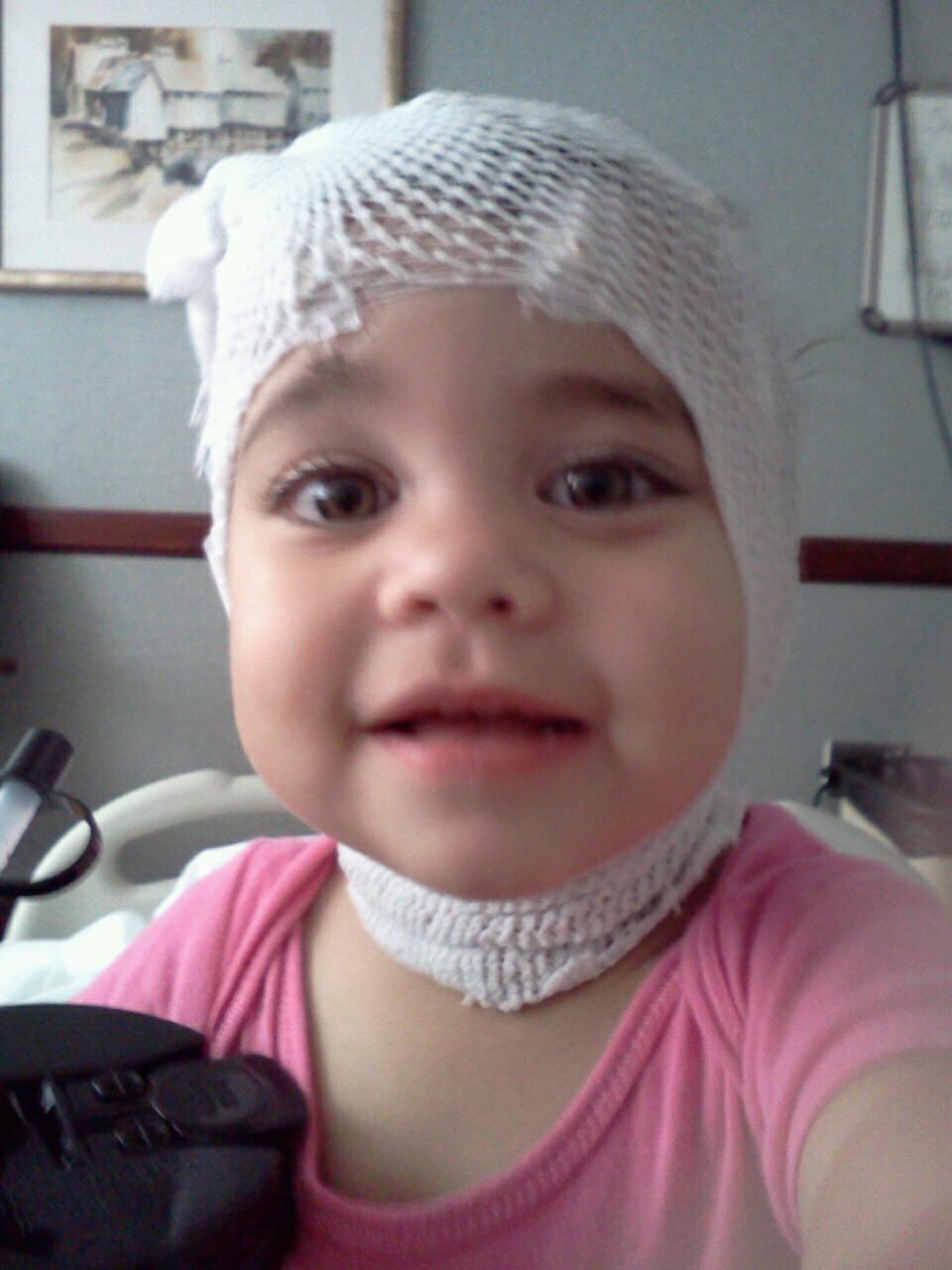 In 2009, my husband, Mike and I, were already the proud parents of 3 beautiful children but we just felt like our family wasn’t complete. We always dreamed of a big family, so we decided to start trying to conceive for the 4th time when our youngest child was about 10 months old. After a few months and pure dedication, we found out we were expecting for the 4th time!! Just a few short weeks later, we found out we would be expecting TWINS!!! We were elated but worried at the same time. I have a history of preterm labor and delivery, so we knew that bedrest would be in the near future along with a preterm delivery. Our boy/girl twins couldn’t wait to meet their brothers and sister, so they decided to make their entry into this world at 31 weeks gestation. On October 22, 2009, Olivia Marie was born at 8:03am and Aithn Henry was born at 8:04am via c-section on a Thursday. Olivia was born first, weighing in at a whopping 4lbs and looked perfectly healthy, at first. Just seconds after they took her 5 minute apgar score, she started to become dusky and her breathing slowed. My husband was whisked away with both babies to the NICU, as my doctors were finishing up with me in the OR. Both of our miracle babies were such fighters, that they were discharged after only 25 days (34 wks 4 days gestation). We were so blessed with perfectly healthy preemies!

For the next 15 months, Olivia and Aithn would both hit every milestone and grow into beautiful little toddlers!! Both Aithn and Olivia started to walk around 14 months old and Aithn caught on quickly!! Olivia was a little bit more of a slow learner. After about 3 months or so, she was still pretty wobbly and was doing some out of the ordinary things with her legs when she would walk. Consequently, I took her to her pediatrician and he recommended taking her to a geneticist to rule out any sort disorders or syndromes. After seeing her geneticist in May 2010, the only thing she could really see was that “maybe” she had hypermobile joints which was why Olivia’s legs seemed so flimsy. We just went home with the new found knowledge, paid close attention to how Olivia was walking and went on with our lives.

On July 26, 2010, all of our lives changed forever. While all of our children were playing before bed, Olivia spontaneously went into a tonic/clonic seizures. She immediately turned blue, her entire body was as hard as a rock and she was convulsing. As all 4 of our other children watched Olivia foam at the mouth and gasp for air, I frantically called 911 while my husband had to stick his fingers between Olivia’s teeth to keep her from biting her tongue off which was trapped in between her teeth and was already purple. After about 4 minutes or so, Olivia finally started to come out of her seizure but into her postictal phase. After another minute or so, EMS arrived at our home and checked Olivia’s initial vitals. We loaded her in the ambulance immediately and headed to the closest Children’s hospital to us. Even in the ambulance, she still hadn’t come out of her postictal phase. Within a few minutes of leaving our house, she went into another seizurec only this time was slightly different. She was having a focal seizure that immediately generalized with large convulsing movements. After what seemed like an eternity for me (which was only about 12 minutes), we finally arrived at the hospital where I carried Olivia into a room and sat down on the bed with her. The ER docs and nurses immediately started attaching leads, asking questions and checking her vitals again. Every time she would start to fall asleep on my chest, her oxygen levels would drop and we would have to stimulate her. After the 2nd time of this happening, I laid her on the bed on her back hoping it would keep her awake. Well, it worked but it didn’t last very long because she went into another seizure that looked identical to the one in the ambulance. Meds were given to try and stop the seizures as she had never come out of her postictal phase even between the seizures. She was then transferred to another Children’s hospital more equipped to treat her properly. After all the tests they ran, we found that she had a brain abnormality. Olivia has spikes in the central midline of her brain. We were given the choice to put her on anticonvulsant medication and we opted to do so. Olivia had been diagnosed with a seizure disorder (Epilepsy), partial on-set seizures and an abnormal EEG.

Being the type of person I am, I came home and spent hours upon hours researching her condition, talking to people with similar and not so similar stories and just trying to figure out what my next step needed to be to make sure Olivia’s life would be as full and as healthy as it could be. From all of the information I had learned, I realized that the TEAM of Neuros that we had spoken with in the hospital had absolutely NO clue what they were talking about. So, my next step would be to find a neuro for Olivia that would be willing to look at the whole picture. My gut told me that her walking issues and these seizures had to be part of something bigger! So, I called her geneticist back and let her know about this new “symptom” and she got Olivia in for an appointment the next day. We had a Chromosome Micro Array done to check for of the syndromes/disorders that could be genetic. Although, it’s not a 100% test, the results came back clear. She then recommended a neuro that she usually works with and is very well respected. So, I immediately made an appointment with him. After just a few short months, I was more frustrated now then I was before I had met this neuro. He always doubted me when I would journal different suspicious episopes and just make me feel like I didn’t have a clue! His bedside manner just didn’t work for us and he refused to look at anything else but the seizures that he wasn’t even convinced were seizures.

Yes, you guessed it, I found a new neuro that we LOVE!! Olivia’s neurologist seems to bend over backwards for her and I. He answers every question I have with honest opinions and takes everything I say into consideration while having Olivia’s health as priority #1! After the last 3 months, we have found more answers than the previous 6 months!! We started Olivia with a speech therapist and a developmental therapist that come out to our house to work with Olivia.
After journaling all of Olivia’s suspected episodes, raising the dosage on her meds and watching her carefully, we have come to a stopping point. Since we’ve never been able to capture any seizure activity during any of the testing that Olivia has gone through, we’ve decided that a 3-5 day video EEG might just give us some of the information that we need to be able to know more about what Olivia is going through and how we can help her. All of the episodes I’ve witnessed and journaled could definitely be other things than just a seizure. If they are seizures, they are the less obvious ones that will just manifest in her eyes, or as finger tapping or maybe some slight drop seizures with her feet. Fortunately, Olivia hasn’t had to endure the horrific seizures that she had to deal with last July.

Until now, Olivia had been doing so well for the last few weeks with no witnessed, obvious seizures yesterday. After being sick for a few days and skipping her nap, she went into her first seizure around 5pm. She would go on to have 5 seizures within the next 3 hours. These seizures were obvious and the closest type seizures to the ones she had initially. For the first time ever, I had to administer her Diastat which made her completely calm and able to get some sleep. I describe the Diastat as a seizure type “EpiPen” but it’s a rectal gel. Today, she seems to be a little better but not completely herself yet.

My dream for Olivia is to have the fullest life she can and to not have a care in the world, especially as a child. As a mother, so many things run through my mind but I just have to leave those thoughts elsewhere and just keep being her fighter, her cheerleader, but most of all, her mother! At just a month shy from being 2 1/2 years old, Olivia has taught me more about life, myself and about her than I could ever even begin to describe! Life doesn’t always hand you lemons or give you what you think you want. God gives you what he trusts you with and what he knows you can handle! He must think that Olivia is one tough sweet little angel!
[/framed_box]