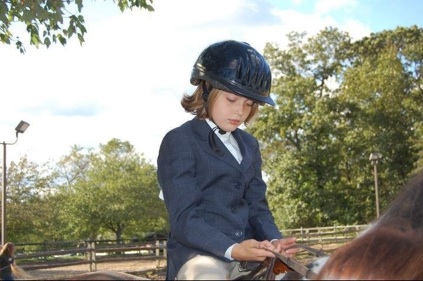 [image align=”left” size=”small”]https://myepilepsystory.org/wp-content/uploads/2012/11/giannastory.jpg[/image]On February 25, 2002 our little five-pound miracle Gianna Cecelia was born. Arriving six weeks early, and the lone survivor of triplets, our beautiful little angel brought us the true happiness every parent prays for. At six-months-old, Gianna had her first seizure. Initially we were told it was simply the case of an infant moving her eyes in a “weird way.” We took Gianna to a neurologist because I instinctively knew something was wrong. After a quick EEG, the doctor said she was fine, but not a minute after we got home, she suffered a grand mal seizure. We were panic stricken when we were told Gianna had epilepsy.

The feelings of joy Gianna had given us each day were now mixed with feelings of guilt. What did we do? What could we have done to protect her from a life of epilepsy? Once the guilt passed and we came to our senses, we realized there was nothing we did — or didn’t do — and nothing we could have done to prevent it. Like all parents of children with epilepsy, my husband Anthony and I sought a cure, but at the same time we decided that we would need to change the way we think and took the video camera to start chronicling what would be our journal of Gianna’s life. We have kept records of every diet, every medication and combination of drugs prescribed. We have logs of every bite of food she ate, thinking maybe some foods were to blame.

It is easy to overprotect your child with special needs, and pushing them to be the best they can be is the hardest part. I look at all the challenges Gianna faces each day as her little body fights the four medications she is currently on. For someone so young, the long days of occupational, physical and speech therapies can be grueling when coupled with the pressures of her Kindergarten and first grade studies. We do our best to teach her to become social and make friends at school.

We did have an incredible year when Gianna was about three; almost twelve months of no seizures. Although the episodes were only at night, she had pretty good control most of the time. Since she was a baby, Gianna has taken up permanent residency in our bed — it’s really okay, you get used to a foot in the head several times a night — it’s the only way we know if she is having a convulsion.

In 2006 we were blessed with identical twins, Gabriella and Grace. In the beginning I had feelings of guilt; how could I take precious time away from Gianna when she needs me so much? Well, the twins are truly a blessing and have helped me realize that I need to let go a bit and give Gianna more freedom to do things at her own pace, as hard as it is to sit back and let her fall over when she is trying to put her pants on, or tell her to wipe her face when she is covered in food. It still breaks my heart to watch as my two baby daughters watch Gianna having an seizure; yet it almost seems they understand as they watch over her and give her a sweet little kiss when the episode passes and she falls asleep.

Recently Gianna started having seizures during the day, so we are once again searching for answers and fearing her being alone in a room. We cannot leave her by herself since these seizures are so sudden and so quiet. We must call her name a thousand times a day to check if she is okay, making us wonder if what we thought were behaviors from the medications are really seizures.

We have gone for yet another medical opinion and new found hope as we are look at different options for Gianna. Could she be a candidate for surgery, an implant or other medications? We will wait and see and continue our hope that one day Gianna will be seizure free!

It would be easy to sit back and cry, or we can fight our hardest for a cure. Along our journey we have been blessed with meeting some wonderful people who have become dear friends. I will never forget the night of May 13, 2008 when Anthony and I walked in the Yale Club for New York’s first annual benefit for CURE. We looked at each other and said, “What are we doing here?” But that night changed our lives forever and I finally feel like I am a part of something special, where together we can make a difference not only in Gianna’s life, but in the lives of all families affected by the debilitating effects of this disorder.

Gianna has gone through countless number of doctor visits and hospital stays, batteries of tests and seizures too numerous to count, and 6 years later we still have no answers on what causes the attacks, or how to stop them. Through all her struggles, we watch our beautiful daughter fight her best fight, yet still managing to laugh and play while making her family and friends smile and laugh along the way, too.

As I pray every night for Gianna’s seizures to cease, I will also keep praying that we find a cure and much comfort for the millions of people and their families affected by epilepsy.
* This story was written 4 years ago, Gianna is still riding horses and has joined a running group (The Road Runners) she runs once a week and swims once a week as part of her training.[/framed_box]